Fire Departments in Clinton County have completed 100% their Fire Reporting submissions for 2016 to the State of New York for inclusion in the National Fire Incident Reporting System (NFIRS). New York State has finished annually, for the several years now, as the State with the highest overall reporting percentage among all its Fire Departments. Clinton County is proud to report that Fire Departments within the County have again met the goal and completed 100% reporting for 2016.

Total calls reported by the 20 Fire Departments in Clinton County to NFIRS for 2016 tallies to 6,917 which amounts to nearly 19 fire department response calls per day in the County.

These reporting numbers include incident response, mutual aid and standby activities conducted on an annual basis by each department. For those Fire Departments that provide EMS either through a First Responder program or an Ambulance program these numbers generally include each EMS call as well. There are a few anomalies in this category for example with the City of Plattsburgh which handles in excess of 2,000 EMS calls annually, their EMS numbers are clearly not included in their 2016 total of 907. 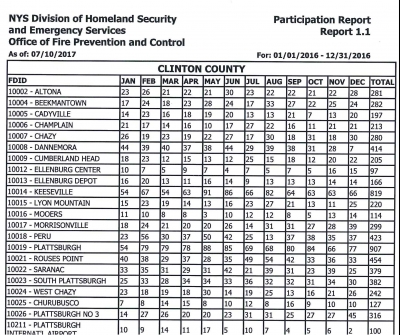 ×
1 of 72 of 73 of 74 of 75 of 76 of 77 of 7
122 entries in the News
Train Incident on Long Island
3 people killed in train-vehicle collision on Long Island Two commuter trains traveling in opposite directions collided with a vehicle on the tracks in Westbury, killing all three occupants in the vehicle before one of the trains derailed and tore into a concrete platform Tuesday night, according to...
➜
Class Starts

Fire Departments in Clinton County have completed 100% their Fire Reporting submissions for 2016 to the State of New York for inclusion in the National Fire Incident Reporting System (NFIRS). New York State has finished annually, for the several years now, as the State with the highest overall repo...
➜
Mobile Command Post 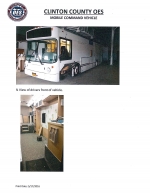 Clinton County OES is actively working on conversion of the old Clinton-Essex-Franklin Library System Bookmobile into a Mobile Command Post. The vehicle will have capabilities for interoperable communications and data as well as work space for incident command staff.
➜
Mass Fatality Planning Event Announced 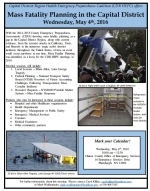 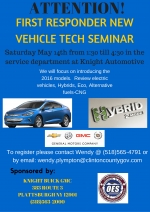 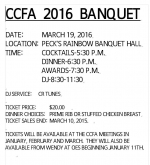 The Clinton County Firefighters Association has announced the date for their 2016 Banquet. This years event will again be held at the Rainbow Banquet Facility in Altona. See the related photo for more information regarding scheduling and ticket purchasing.
➜
Flashover Simulator Training Announced for Clinton County

CP Rail in conjunction with the Clinton County Office of Emergency Services and the City of Plattsburgh Fire Department is offering a Railroad Response Safety Training 3 hour class in August. There will be 2 evening sessions and 4 daytime sessions offering numerous opportunities for First Responders...
➜
Deputy Coordinator/Fire Investigators Sought

The Clinton County Office of Emergency Services is seeking Letters of Interest and Resumes from individuals meeting the required qualifications and interested in performing the duties associated as a Volunteer Deputy Fire Coordinator assigned to the Fire Investigation Unit.
➜
Upcoming Fundraising Night

The Champlain-Mooers EMS Squad is pleased to announce that Texas Roadhouse of Plattsburgh is offering to assist the squad with a fund raising event to help with funding the construction of the new Champlain-Mooers EMS building.
➜
Cooperative Forestry Assistance Grant Announced

The Saranac Fire Department will host a Technical Rescue Training Day on Saturday August 2nd at Saranac FD Station 1. The session starts at 8am with all attendees requested to gather at the Fire Station.
➜
Check out this NY Times Article 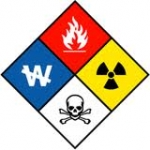 Anyone interested in additional HAZMAT training or the County HAZMAT Team should consider the following offering. There will be a HAZMAT Technician Basic class starting the week of April 7th. The class is 40 hours in length and will run from 8a-5p at City Station 1.
➜
Recruit NY 2014

Below is a copy of the body of a letter I recieved recently from President Jim Burns of FASNY regarding the Recruit NY 2014 campaign. Although FASNY is not often well represented in our County they still represent us as members of the Fire Service and they offer some great programs including things ...
➜
PHMSA First Responder LNG Safety Video
Folks some interesting information on Liquified Natural Gas (LNG) is listed below and can be seen on the video in the link below. Please note that the gas pipeline traversing our County and the smaller Utility Company branch distribution network in our County are both carrying specificly vaporized N...
➜
Cold Weather Operations Reminder 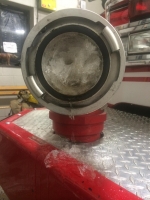 Interesting little story/advisory from the Buffalo Fire Department. Something that we in the North Country are all to familiar with. My department, we run with our front suction lines dry with the drain valves open from October to April, ya just have to remember to close the drain valves when you wa...
➜
Social Media - Its here, we must learn to tame it......
REPOSTED FROM firerescue1.com Goldfeder: Never, ever post patient photos anywhere It may seem obvious that it is unprofessional, possibly criminal, to post images from the scene on social media, yet it happens By Billy Goldfeder The Secret List So, about a catrillion people woke up this morni...
➜
1 of 72 of 73 of 74 of 75 of 76 of 77 of 7
122 entries in the News
Clinton County Office of Emergency Services
Mailing Address
16 Emergency Services Drive
Plattsburgh, New York 12903
Physical Address
16 Emergency Services Dr
Plattsburgh, NY 12903
911
518-565-4791
518-566-1202
Map
Directions

This site has been viewed 385,244 times.
News
Pictures
Apparatus
Maintained by the members and staff of Clinton County Office of Emergency Services. Designated trademarks and brands are the property of their respective owners. Copyright © 2006-2022. YourFirstDue Inc. All Rights Reserved. Content on this web site is supplied by Clinton County Office of Emergency Services. YourFirstDue Inc. cannot be held responsible or liable for any content, text, pictures, or any other media found on this web site.
Management login
Powered by